The Secret of Literacy

Tonight’s 15 minute forum was led by our Head of Geography Ben Crockett.  As a part of our CPD programme last year, Ben led an ‘EduBook Club’ group on David Didau’s book, ‘The Secret of Literacy’.

Ben started by exploring some of the more unhelpful views, some teachers hold about literacy:

Instead, Ben offered a more considered view, from the book:

“The knowledge of the subject is the language of the subject.  We cannot separate our ability to successfully understand and demonstrate our knowledge without being literate in our own subject field.  It should not be considered as a bolt on, nor is it just about SPaG”

He then went on to explore some key ideas from the book, that resonated with his book group.

In addition if you’re literate you will gravitate towards literate friends. It comes as no surprise that “good readers may choose friends who also read avidly while poor readers seek friends with whom they share other enjoyments”.

Subsequently the gap between the word-rich and word-poor widens.

Myhill and Fisher (2005) – note that “spoken language forms a constraint or ceiling on not only the ability to comprehend but also on the ability to write, beyond which literacy cannot progress”.

If our spoken language isn’t up to scratch then nothing else will be.

If “how we speak changes the way we think” how can we improve out students oracy?

“Currently teachers fear teaching lessons described as didatic, teacher-led or from the front. This must change.”

Didau strongly argues for the reinstatement as teachers as the leader and expert in the classroom. This is intrinsically linked to students use of academic language – if the teacher does not lead, then there is no modelling of academic register and therefore students will revert to type.

Do not stop teachers explaining, but just ensure that explanations are as well planned as if you were planning a whole lesson. 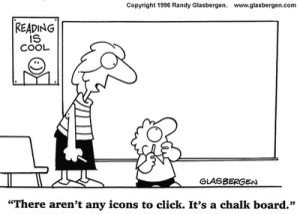 The ‘Blue Peter approach’ to modelling a piece of extended writing i.e. ‘here’s one I prepared earlier‘, whilst well intentioned, is not always useful.  The problem here is that all they see is the polished, perfect end-product on a powerpoint slide and not the transition from every day language to academic register.   Students benefit much more from seeing the process of modelling in action, by you writing out answers/ essays etc on the board (i.e how academic specialists write ). With this in mind I have tried to follow Didau’s lead of writing tasks/ sitting exams at the same time as my classes, so that I am modelling the process and identifying issues that the students might have.

Despite your best efforts with modelling it is still likely that when given an independent task students will normally revert to their “everyday language”, I have therefore been using “Nominalisation” with certain groups.

Student sentence: “The cliff was eroded at the base and a wave cut notch formed.”

Redraft with nominalisation: “Erosion at the base of the cliff, subsequently led to the formation of a wave cut notch.”

Whilst supportive of the need for scaffolding , Didau is quite critical of writing frameworks – “harbingers of low expectation” and “formulaic”.  If students rigorously follow a set format with their writing, they become overly reliant on the scaffolding

Even when admitting that they are necessary he argues that too often the scaffolding is left visible or the student left reliant on it.

This entry was posted in 15 Minute Forums, General Teaching and tagged literacy. Bookmark the permalink.

2 Responses to The Secret of Literacy