Posted on February 16, 2017 by classteaching

John started with a focus on teacher’s approaches to different scenarios:

Importantly, the use of consequences appears as ‘Step 9’. This means that 8 other strategies have been attempted, before the teacher resorts to sanctions. The focus of this idea is that prevention and reduction of behaviour issues is better than reacting to those issues.

Jack then discussed how his approach to behaviour management has changed in his time at Durrington, having reflected on his practice following John’s previous 15MF. Jack discussed that his PGCE had not prepared him for non-confrontational behaviour 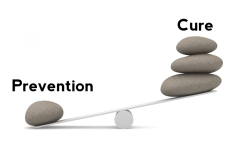 management approaches because he had been told – “You need to make sure that they know what you being angry is like.” However, Jack’s approach to managing difficult behaviour is now one focussed on ‘finding a way to avoid it in the first place’:

Language of choice – An important aspect of this approach is the ‘use of language of choice’. This involves giving the student the choice as to their next step – If you choose do this…then you are choosing for this to  happen – and avoids negative responses to ‘surprise’ warnings.

Separating the behaviour from the student – It is important to remember that the majority of a student’s behaviour is not directed at you (the teacher) personally. Therefore, when a student does show behaviour which is not acceptable,  a subtle change of language can be empowering. By stating that ‘we’ (the school) do not accept this kind of behaviour means that it is not you reacting but the school. This removes the personal nature of the issue and increases the chances of a positive outcome.

Don’t shout – In the majority of situations, shouting will be counter-productive. The students may respond by shouting at you, laughing at you or having a brief improvement and then behaving even worse. A different approach could be to listen to the student when they arrive. If the student is agitated on arrival, an immediate confrontation could exacerbate the issue. This has proven successful with one particularly challenging Year 8 student:

Bring your personality – Often difficult behaviours can be managed through the enthusiasm and passion of the teacher, because the issues do not regularly arise. The important aspect of this is that effective working relationships are developed between the teacher and the student to allow for successful outcomes (even when the student does disrupt).

Focus on the positives (not the negatives) – Catch the students doing something right. Praise the students for doing the right thing and then discuss where the student may not have got it right. This allows more positive language to be used and avoids direct confrontation, but still addresses the issue that has been created.

But it is vital that…

Despite all of these things, teachers need to remember that students will misbehave and that these approaches are not a ‘magic wand’. However, by adopting non-confrontational approaches small issues, do not need to become big issues; and big issues can be dealt with effectively.

This entry was posted in 15 Minute Forums, General Teaching and tagged Behaviour, relationships. Bookmark the permalink.