Posted on December 4, 2016 by classteaching 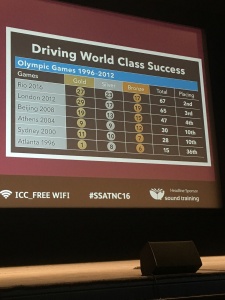 Last week I was fortunate enough to attend the SSAT National Conference.  It was a great two days with some inspirational speakers – many of whom I got some great ideas from.  The highlight though was listening to Baroness Sue Campbell.  Sue was made Chief Executive of Youth Sport Trust in 1995 and has been Chair of UK Sport since 2003.  She started her  talk with the Olympic medals table (left) which illustrates the amazing legacy that this remarkable leader will leave.  Sue said that whilst financial investment into UK Sport had undoubtedly played a role, more important was culture.  In Sue’s words ‘Culture is about people and a belief’.  However, she also pointed out that you can’t just impose this belief on people, you need to learn about the people you are working with and take them with you.  This is what the best leaders do. 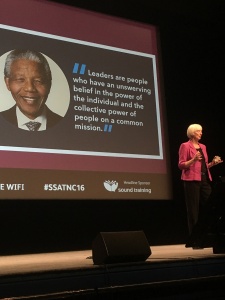 The best leaders create an environment of success, that allows people to succeed.   They do this by having a strong awareness of their own purpose:

“If you abandon your moral purpose, you don’t really have a purpose”.

Sue talked about where she found her inspiration for success and leadership.  She looked around a number of sports and successful people and got snippets from all of them, however, it was only when she really explored Formula 1 racing that it all became clear.  This showed Sue what it really took to become world class and she was able to distil this recipe into three clear areas.  Sue related these three areas to three key questions that the most successful F1 teams were able to answer.  They are great reflective questions for us as school leaders too. 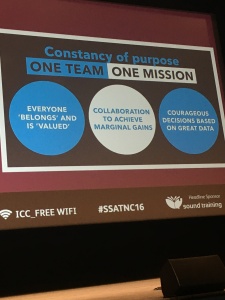 1. Can you eat your lunch off the garage floor?

Everybody in Schumacher’s team wanted to be world class, including Schumacher, the mechanics and the man who slept the garage floor.  Everybody knew their role and everybody wanted to do their role as well as they possibly could.  As a result, the garage floor was spotless and you could eat your dinner off it.  When questioned, the garage cleaner talked with passion about how he kept it so clean and why this was so important.  Some questions for school leaders:

2. How long does it take to change a tyre?

Everybody involved in the pit stop spent hours and hours practising their small part of the job e.g. taking the wheel nuts off, getting the wheel in position, removing the old wheel etc.  Their aim? To take 0.01 seconds off the pit stop time.  They would give each other feedback about how to improve and coach each other about how to improve.  They understood that the success of the team was down to everybody getting 0.01 better – the idea of marginal gains.  Huge changes in performance are hard, but small changes are manageable.

Do you encourage and support everybody in your team to get 0.01 better?  Do members of your team give each other feedback and coach each other to get better and better?

3. How long does it take to make a decision?

Engineers would scrutinise data and make split second decisions that would mean the difference between 1st and 4th place.  For example, with two laps to go, they calculated the amount of fuel they had left and concluded it was just enough to make two laps, without a time-consuming pit stop.  They did – and won.

Do you use data sensibly and then use this to make the right decisions for your team? 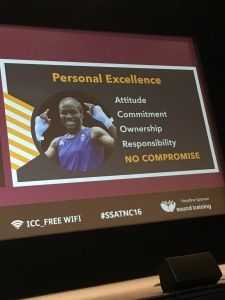 Sue talked about the importance of personal excellence, when the team are striving for world class.  As a leader, she would support this by asking questions of her team, rather than just giving instructions about what to do:

What could you do?

She also talked about being flexible with staff.  Find out what their strengths are and use these for the good of the team.

Sue finished her talk by leaving us with a question:

“Does every kid leave your school and think ‘You know what? I’m OK'”

Sue really is an inspirational person and it was a privilege to listen to her.

Many thanks to Sue Williamson, Tom Middlehurst and everybody else at SSAT for organising a great event. 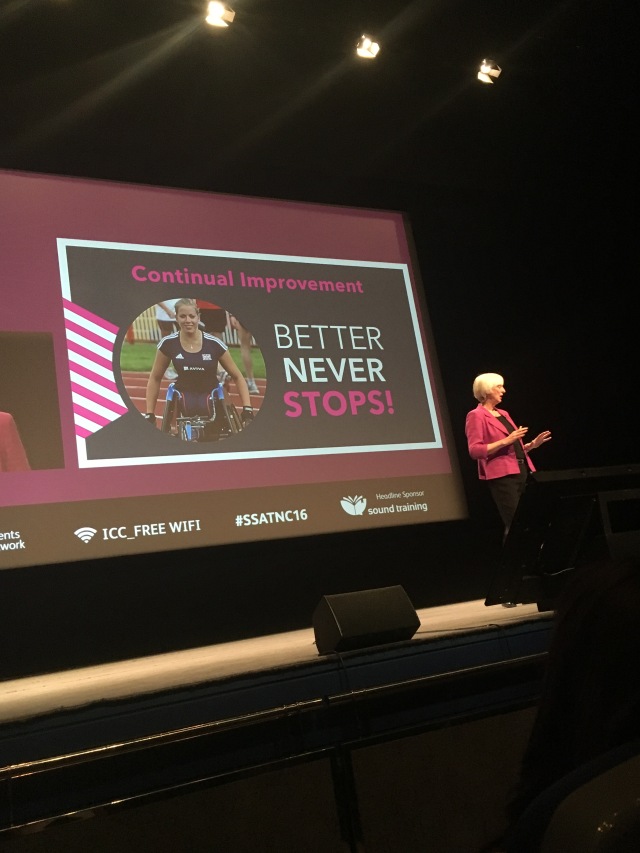 This entry was posted in Leadership and tagged Leadership, SSAT, Sue Campbell. Bookmark the permalink.