The 15 minute forum was led by the Senior Student Leadership Team tonight.  They gave us their views on the range of feedback they received from teachers.  This was very timely, as it’s something we have been thinking about a great deal as a school – more here.

The team started by saying that the feedback they now receive from teachers has moved on a great deal (they are all in Y11, so this is their fourth year in the school).  They get less vague and generalised feedback e.g. ‘well done’ and more helpful and specific feedback, that gets them thinking about improving their work.  They all agreed that this was useful to them – they would rather get very specific and personalised feedback on a particular piece of work, once every few weeks, than a book of red ticks that doesn’t really tell them much.

They then spoke about specific types of feedback – the comments that follow are their thoughts. 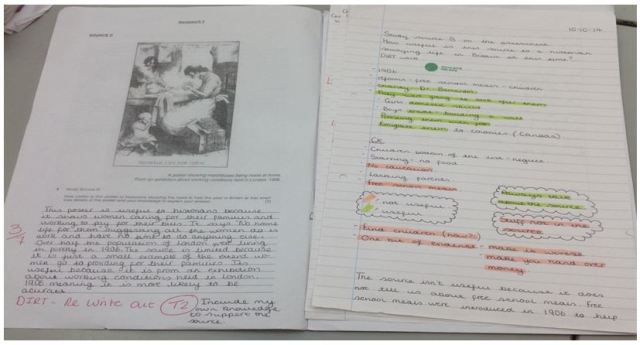 This was seen to be useful – but to do it well, they had to be given enough time in the lesson to do the improvements.  The consensus was that anything between 20 minutes and a whole lesson was best, as that allowed students to really get to grips with what they had to do to improve and then get on with it.  It shouldn’t be done too frequently though, as students need to have the opportunity to learn the content first and try it out for themselves, before they get feedback on it.

The students also commented on the use of codes for feedback.  Whilst these save time, they need to be fully explained, so that students know exactly what they mean. 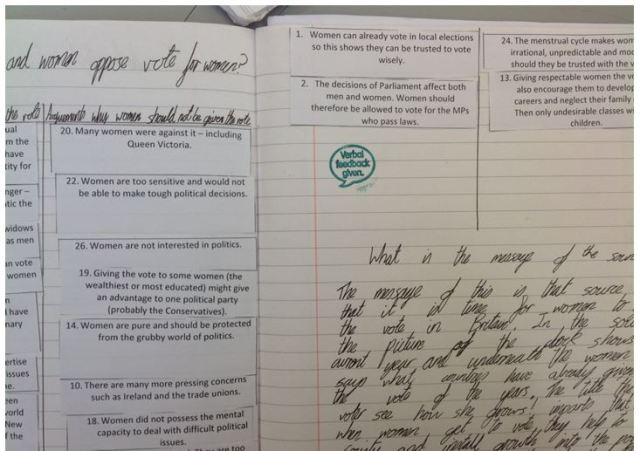 Verbal feedback is really useful.  It tells the students there and then what they need to do in order to improve the work they are doing in that lesson.  It’s also easier for them to respond to, as it’s fresh in their memories – and if they don’t understand the feedback, they can ask for clarification.  They did make the point though that a solitary ‘stamp’ like the one above is not really useful.  They like to have what the feedback was, written in their books (either by them or the teacher), so that they have a record of it – that they can refer back to later e.g. for revision purposes.  More on this here.

Feedback from peers, whether it be individual or from the whole class (gallery critique) was said to be useful, as it gave students more ideas about how to improve their work.  But it was stressed that whilst it’s useful, it’s no substitute for teacher feedback.  If students don’t understand a complex idea or problem, their peers are unlikely to be able to explain it adequately  to them – they need their teachers to do this.  Similarly, students don’t know the exam board requirements inside out like teachers, so their feedback is unlikely to be specific enough.

One to one feedback

This was strongly favoured by the students.  They really appreciated it when, for some lessons, the class were set a task that they could get on with, whilst the teacher spoke to individuals one to one.  This allowed them to really unpick their work and give them very specific and personalised improvement points, that they could then go back to and address.  They also found it useful when teachers used this strategy to tell them what was good about their work – because they could then do more of it.

One type of feedback that there is often not the opportunity for students to respond to, is that from written reports.  Our students get 3 ‘Tracking Points’ throughout the year, which include short and specific improvement targets – that can easily get lost.

In Citizenship, the teachers are trying to address this.  The sheet on the left is used by the students to log the ‘improvement points’ from their reports (that go home to parents), in their class folder.  They will then have a DIRT lesson where they have to respond to the improvement point, by completing a piece of writing that addresses the issue (right hand picture).  They then log this, by highlighting the improvement points, when they think they have addressed it.  Their learning is then further supported by answering a specific exam question, that relates to the improvement target.

Finally, the team were full of praise for the MFL department, who have been giving them feedback on (and supporting them with) getting their folders organised -see picture above.  An important point – whilst it is of course essential to focus our feedback on their learning (and our teaching), we should also consider giving them feedback on aspects of ‘self management’ like this.

This entry was posted in 15 Minute Forums, General Teaching and tagged Feedback. Bookmark the permalink.