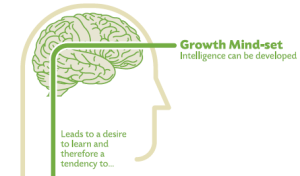 In a previous post, I stated why I think developing a growth mindset with students is so important.  It makes students:

Whilst it is obviously important to develop this culture with staff, through their teaching and interactions with students, if it’s going to be embedded across a school, we need to get students thinking about mindset.  By getting them to think about mindset, we will encourage them to reflect on themselves as learners and then hopefully change their approach to learning.  There’s no quick fix here, but I think there are opportunities all around us in schools, that can be exploited for this purpose.

I’ll try to give a few examples of how we’re trying to get students to think about mindset at DHS.

All students have a planner and they look at it a number of times a day (he says optimistically!)  Over the past few years ours has had a photo of our school on it.  Whilst quite nice (and it is a lovely building), this is an opportunity to get students thinking about mindset.  So next year, this will be the image on the front of their planners (courtesy of Jason Ramasami): 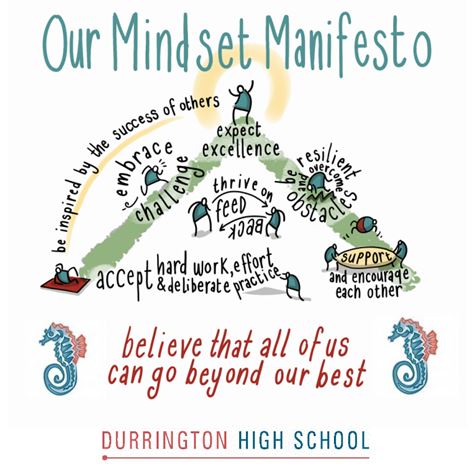 Now, is this going to transform learning for all?  No, but what it might do is to get students thinking about themselves from time to time.

The inside of planners have usually had some kind of list about qualities required to be an outstanding learner, or a list of ‘Business & Enterprise Skills, or PLTS.  Not in 2014-15 though!  Instead we’ll elaborate on the front cover and unpick what these growth mindset attributes look like: 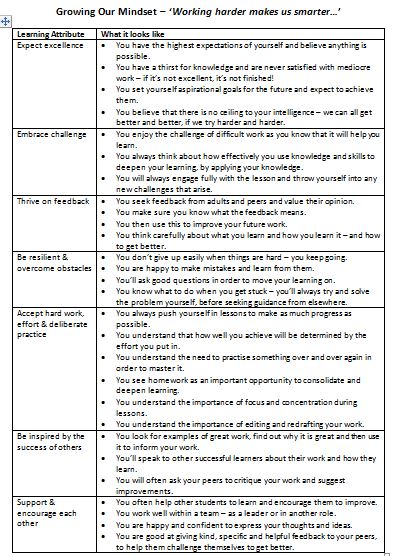 On a termly basis, students will then think about these attributes in form time and how they apply to themselves.  They will record this on a chart like the one below and then set themselves some actions to address any weak areas. 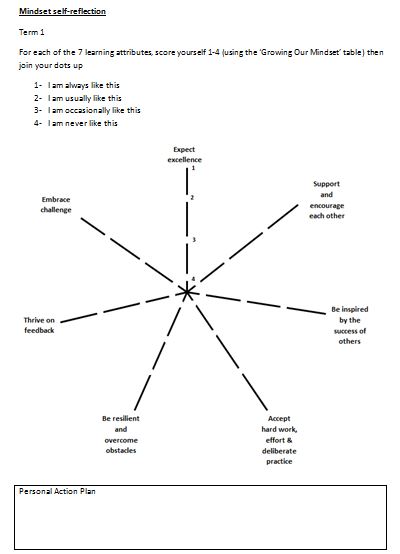 Measuring mindset in a quantitative way accurately is at best difficult and at worst impossible. That’s not the purpose of this though.  This activity is again, simply to get students thinking about and discussing mindset and most importantly, thinking about themselves as a learner in school.  Following that, they can then commit to tweaking their own learning behaviour in some small way – marginal gains for students.

This document can be downloaded here. 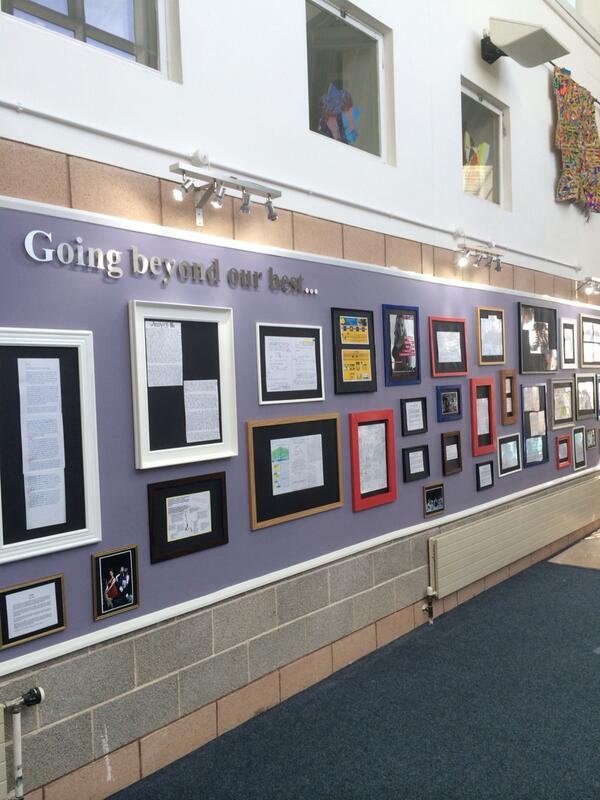 I blogged last week about our new Excellence Wall.  The work up here is from a range of students, but has one thing in common – it took hard work, effort and determination.  The response from the students has been great.  Lots of them have been admiring the work at break and lunchtime – and then discussing what makes it so good.  Again, this must surely make them think about their own work – are they putting in enough effort to produce a piece of work worthy of ‘That Wall’?

As well as the wall, we’re looking at other opportunities to raise awareness of mindset.

Chris Hildrew has produced a series of excellent posters like the one above – they can be downloaded here.  We have personalised them for DHS and every week a new one goes up on the ‘Mindset Matters’ noticeboard – which is in a prominent position in the school.  It is also tweeted by the school twitter account – so reaching students and parents.

Another mindset display by the student reception, encourages students to think about the mindset attributes:

Last term I did two week ‘assembly tour’ across the whole school.  I’m indebted to John Tomsett for much of the content of the assembly.  The purpose of this again, was just to get students thinking about mindset and what it means for them. Here it is:

It can be downloaded here.

Again, the prolific Chris Hildrew has produced a whole series of great assemblies on mindset here.

Next year I want to think about other resources that can be used during form time to get students thinking about and discussing mindset.  At a conference in London last week, Carol Dweck suggested using this article as a good starting point for discussing mindset with students:

The full article is here.  The power of this is that, probably for the first time, it makes students realise that their intelligence is not fixed, but instead can be developed by hard work and effort.

So, are these things making a difference? We’ll probably never know is the honest answer.  However, this week I was interviewing students to get some quotes to go in the new prospectus. I was asking them to think about and write down how being a student at DHS has developed them.  Their responses (some extracts below) suggest that we are getting there in terms of mindset, but of course, we’re not there…….yet!

“Being a part of Durrington High School has made me want to achieve more than I believed was possible.  It has made me believe that I can achieve excellence.”

“We are lucky to have the experience of teachers who will support, inspire and embrace our learning everyday.  We are taught to overcome obstacles, work hard and have a commitment to succeed.”

“We are a community here at Durrington High School, where we are motivated and driven by the excellence represented by everyone around us.”

This entry was posted in General Teaching and tagged growth mindset. Bookmark the permalink.

9 Responses to Thinking About Mindset